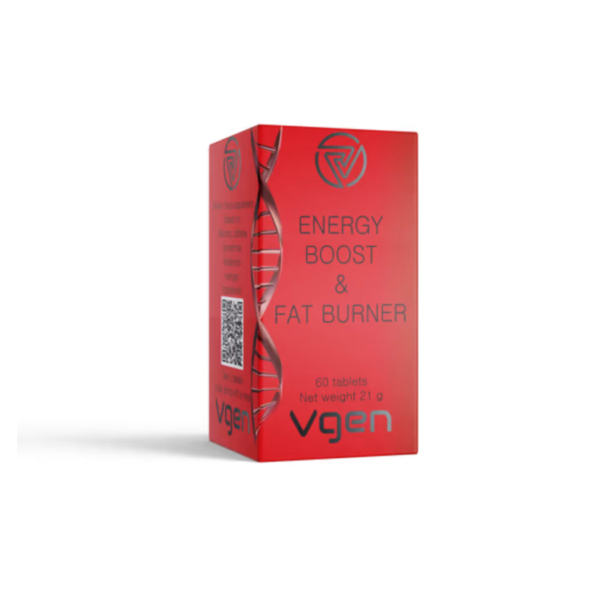 A smart product that stimulates fat loss and energy production in a safe and effective way. It has no calories (unlike most energy drinks). The unique combination of its ingredients provides an instant physical and mental boost, whilst promoting gradual long-lasting fat loss

Order as a subscription and receive this product monthly. Cancel any time – No hidden costs.
Additional information

Due to variations in genes related with the metabolism of glycogen, fatty acids, and other biological fuels, a large part of the world population is having trouble liberating enough energy to maintain prolonged exercise or mental activity. One or another inefficiently running metabolic pathway is often the cause of fatigue, muscle weakness, lack of stamina or difficulty to concentrate, and increased storage of fat tissue.

VGen ENERGY BOOST – FAT BURNER contains a formulation of carefully chosen metabolites that are designed to overcome genetic flaws and deal with the issue of “low energy / high fat storage” by acting on 3 different levels:

To support enzymatic reactions for energy provision, this product contains all the cofactors that are necessary, but already in their bio-active form. Most supplements on the market contain a form of vitamins that still needs to be metabolized once inside the body. At Vgen we use the biologically active form of the ingredients, which are directly available and can be used immediately by the body. This bypasses possible genetic variations and even stimulates the “slower” functioning reactions for people with an inborn slow metabolism. This supports the fat-burning process, but also increases the use of other non-protein energy fuels, so that muscle tissue is preserved, providing the body with extra fuel to combat fatigue and keep going with increased endurance as well as power.

Vgen ENERGY BOOST – FAT BURNER contains highly purified and concentrated Hesperidin, Naringin and Synephrine, which are all natural ingredients that are found in citrus fruit. They are particularly effective at accelerating the fat-burning process by stimulating thermogenesis. Other benefits include increased insulin sensitivity, improved blood flow, reduced inflammation and boosted production of adiponectin (a hormone involved in glucose and fatty acid metabolism). Prolonged use of these ingredients supports a gradual, safe, persistent loss of fat tissue. It is especially effective in combination with physical exercise.

The product also includes caffeine, which provides an instant boost for physical and mental performance, and has additional health benefits because it blocks adenosine receptors in the brain. This improves memory, learning capacity, ability to focus and endure longer and enhanced activities.

Genetic sequencing is a powerful tool to achieve your goals, improve your wellbeing and increase life expectancy by being pro-active. Verelst Genetics analyzes 100% of your DNA and supplies dietary supplements that are based on genetic research.