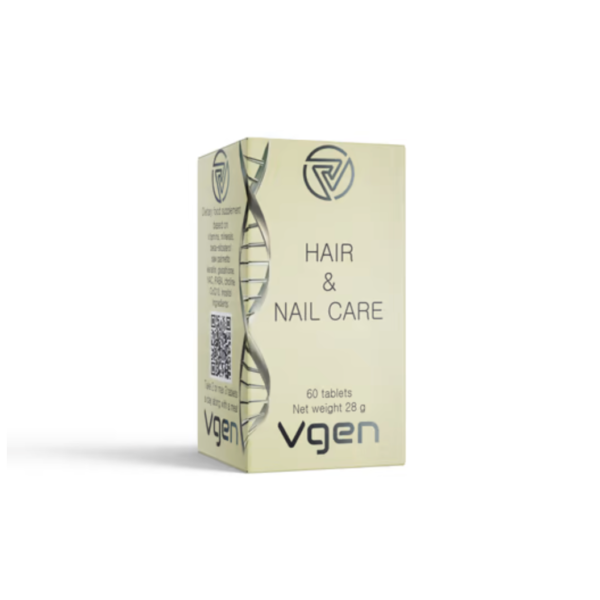 Efficiently combats male and female pattern baldness, whilst stimulating the growth of strong hair and nails.

Order as a subscription and receive this product monthly. Cancel any time – No hidden costs.
Additional information

Many men, but also women, suffer from Male/Female pattern baldness, known as Androgenic Alopecia. Hair thinning can start as early as the age of 20 in men. Women tend to experience the symptoms at later age of around 40. The mayor cause of this condition is Dihydrotestosterone (DHT), a hormone that is crucial for general health, but destroys the hair follicles when its concentration is too high. Although Testosterone is known as the “male” hormone, women also produce it. About 10% of the total testosterone produced in both sexes is converted to DHT. When levels of DHT rise too high, the hair follicles lose their functionality, which results in hair loss.

Apart from hormonal control, the activity of our hair follicles depends on a sufficient supply of nutrients. This also applies to the nail root, where proliferating cells transform into keratin, causing the nail to elongate. It is not possible to grow strong and healthy hair and nails if the cells that produce them are not receiving the necessary nutrients, vitamins, minerals, and other cofactors to sustain biosynthetic reactions. Even if we eat a nutritious well-balanced diet, most vitamins still need to be metabolized in the body before they gain functionality. Unfortunately, most people carry one or another genetic variation that limits their capacity to activate a vitamin or cofactor, which can cause a deficit, even though dietary consumption is adequate.

Furthermore, all enzymatic reactions that occur to make a product like hair or nails, create metabolic waste and residues of reactive oxygen species (ROS). When these residues pile up, the cell loses its activity. The body has a very efficient “cleaning and anti-oxidant” system that neutralizes and eliminates harmful residues, with Glutathione playing a very important role. Ageing, however, and also genetic differences between people can be the cause of too little glutathione, with devastating results for the health of our cells. Highly active cells like hair follicles and nail roots produce a lot of metabolic residues and therefore depend greatly on a sufficient supply of glutathione and anti-oxidants.

To support the strength of hair and nails, VGen HAIR AND NAIL CARE includes ingredients in a combined strategy that target 3 causes of hair loss and brittle nails:

Genetic sequencing is a powerful tool to achieve your goals, improve your wellbeing and increase life expectancy by being pro-active. Verelst Genetics analyzes 100% of your DNA and supplies dietary supplements that are based on genetic research.